Slice of LIfe- That Thing We Do Called Writing

I am working on my MFA through the Solstice Low-Residency MFA in Creative Writing Program at Pine Manor College If anyone is interested in low-residency programs, I'd be happy to talk about this experience, as it is truly life-changing in my world not only as a writer, but also as a person.

While I have many shares and posts to write, one of the most important is not an earth-shattering one, but a critically important one, and that is how much courage writing takes because it is SO frustrating and humbling. Over the first half of the ten-day residency, I percolated the story arc of a novel I've been working on for a few years. Yes, a few years. I have a couple of drafts written, but I know they're not quite right. During that first half of residency, I re-wrote the story arc, first in my notebook and then on stickie notes. I shared it with some of my workshop colleagues, and they liked it. The arc was clear. I could answer their questions. I knew my characters. I could describe my setting.

And then in workshop, our mentor asked a question that derailed the work I've done. Who has the most compelling story? $*!%&*. The answer is not the character whose point of view is what I've written and planned on revising. Therefore, I have an entire rewrite to do, as who wants to read a book from the perspective of anyone but the one with the most compelling story.

Sigh. Writing is so humbling. So frustrating. So maddening. And still, we keep going, pressing onward with revisions and rewrites and even re-creations--

At least it's July and it will be August and those are my writing months. Onward.

Our Summer Writing Academy featured poetry, and it was one of my favorite weeks of teaching writing I've ever had. Students read poems, found poems, created poems, and wrote their own poems, and the learning and inspiration that happened from studying words and language so closely was incredible to watch.

We had a short celebration at the end of the week to share some of the work the students did. Summer is for fun, so we tried hard to incorporate play into the world of our writing. One of those play elements involved sidewalk chalk as a forum for sharing and celebration. Students loved writing their poems on the blacktop, and some of them even got creative with the bricks. Poems and words filled the red bricks of the school wall. Some of the students even created an elaborate and well-engineered pencil that directed and welcomed parents and guests to our poetry celebration. The caption was welcome to the wonder of our writers.

Unfortunately, the custodians didn't think the brick poetry was as good an idea as we did. I have some advice for all you would-be writers of poetry on bricks--think hard before you allow odes to appear on bricks.. Chalk is a little sticky when it's on red clay.  After listening to the custodians review their summer work lists which did not include scrubbing the outside walls of the school, I volunteered myself and my daughter to come back and remove the poetry (although I do think there could be worse things on the walls of an elementary school!).

Larkin and I had great exercise scrubbing the pencil, the words of welcome, and all the other poems that so happily decorated the bricks. 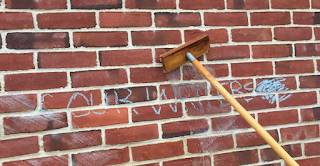 Posted by Melanie Meehan at 8:01 AM 7 comments: 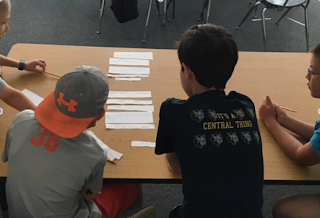