Slice of Life: A broken air-conditioner or an unwelcome encounter?

Up until about 6 on Saturday night, I felt guilty. Guilty that I wasn't flying to Michigan to help move Larkin to Denver. Guilty that I was at the beach with another daughter and her delightful friends. Guilty that the weather was perfect in Rhode Island as opposed to muggy and hot across the middle of the country. The most recent snapchat from my husband and Garth had them driving through Nebraska with the windows open and their hair whipping around. Somewhere between Des Moines and Omaha, the air conditioning had broken. Seventeen hours is a long time in the car in the best of circumstances. Without air-conditioning, it sounded really miserable. I felt really guilty.

"Let's take the dogs for a quick walk before we make dinner," my sister-in-law, Amy, said. The dogs were thrilled. The girls were all playing games in the back yard, and the rest of our crew had plenty of chores to keep them occupied. Amy and I are fast in the kitchen. We could take the dogs for a walk and still serve up dinner before anyone showed signs of being hangry.

We headed toward our favorite trail, a place where we could unclip the labs and let them run. Within seconds of Okie's freedom, he bolted into the bushes and then bolted out of the bushes. Reeking. Words I didn't know I knew spiraled out of my mouth as the sour skunk smell invaded the walk. Okie dashed to the open grass, rolling and rubbing.

Amy made dinner on her own as I bathed Okie over and over with various concoctions of baking soda, vinegar, palmolive, and Nature's Secret Skunk Formula.

As I write this slice, the air conditioner is fixed, and Okie has had a professional deoderizing at Petco. (One was much more expensive than the other.) I'm no longer feeling guilty--just excited to keep hearing about Larkin's latest adventures in her next chapter of life.

Slice of Life: When we want what we don't want

"What shoes do you think I should wear?"
I was talking to Larkin, our oldest daughter, as I drove across town. She was preparing for a first-job interview, and I was several hundred miles away preparing to interview someone else's 22 year-old for a first job.
"It's a Skype, Larkin," I said. "I don't think your shoes are going to be the deciding factor."
"But --"
"Wear the shoes that make you feel the most confident," I interrupted, remembering my pledge to validate her.

The next hour passed with an impressive demonstration lesson and thoughtful answers to our collection of questions. I managed to focus on the answers and content, although I wondered at one point how much thought had gone into our candidate's shoes. I liked them. I didn't compliment them, but I did share with her that my own daughter was having a parallel experience as we walked from the classroom back to the interview room.

When our candidate left, I couldn't resist.
"I'm sorry," I said. "I really need to check my phone and my own girl's experience before we debrief."
My phone was full of text messages. F.U.L.L.

My response shocked everyone-- including me-- because I started to cry.
"Go call her," they all said. "We will wait."

I called her and we had a quick celebration conversation. We'd plan the details of how to get her from Michigan to Denver (next week), and we'd figure out how we'd visit from Connecticut. No worries. There's a direct flight.

I returned to the interview room. We debriefed. I focused.

And then, when I got back into the car to drive to a different school, I cried. To the point where I had to reapply mascara.

Sometimes in life there's a fine--almost invisible-- thread between what we want and what we don't want.

On Saturday afternoon, my husband, two of our daughters, and I headed down the small trail that leads to the beach. As soon as we got there, Julia looked up.

"Doesn't look like it's going to stay much of a beach day," she said. Julia's frequently the master of the obvious.

Dark clouds lined the brighter ones, moving closer. I let the waves wash over my feet and ankles before giving her words and warning the credit they warranted.

Good thing we did, as the skies opened up, and we were able to watch less forward-thinking beach-goers come dashing up the path and through the puddles, soaked through from the sudden outburst.

Since that burst hadn't been on the radar, no one, not even the sailors out in the harbor were ready enough to head in and make it to cover. Another one of our girls works at the sailing club, and she had to take the launch out to help out those sailors whose boats were filling with water with sails spinning them into unplanned paths. It really was a surprise squall.

Later, we had warnings  come up again, predicting hard rain in our area.

"We're going to get pounded again," Clare said, holding up her phone.

At least we were home where we could watch the storm brew and unleash.

That being said, nothing arrived. Thes sky stayed clear, and the sunset was stunning. I think we all watched it with extra appreciation because we were so expecting storms. 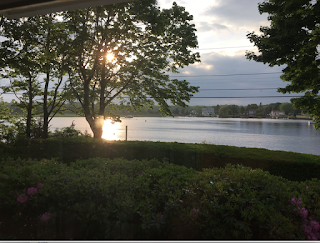 It occurred to me that sometimes that's how teaching is. What you think will be fine--what you think will go smoothly without outbursts or thunder--sometimes surprises you, drenching you, especially if you're not ready. And other times, when you're hunkered down, expecting the storm, it's peaceful and productive. And while we try to anticipate and be prepared, sometimes there's laughter and joy in the unexpected. And sometimes the unexpected peace is the most appreciated. Sometimes it's those moments that embed themselves in lasting memories.

Posted by Melanie Meehan at 5:25 AM 9 comments: