Every Tuesday, the writing community of Two Writing Teachers hosts Slice of Life. All are welcome to participate by linking up posts or commenting on other participants.

Last night, I had a twenty minute car ride with my nephew, Jack, who is an attentive, bright 13 year-old.

"So Mel," he said. "What do you think about this whole NFL thing? Have you been paying attention to it? Do you know what's going on?"

We talked for a while about how he views the actions of some of his favorite football players. He had strong opinions that Colin Kaepernick shouldn't lose his job because he exercised his right to free speech. I pointed out that maybe he didn't lose his job, and I decided to play the devil's advocate a little bit (although I probably feel even more strongly about it than Jack), questioning Jack about where we should draw the lines on how people use their power, fame, or privilege.

Earlier in the day, I had tweeted about my concern that we were now paying more attention to the issues around free speech than the ones around racism and police brutality--which were the issues that started this whole conversation. I asked Jack what he thought about this--whether he thought we were creating different conversations in order to avoid possibly more difficult conversations around how people of color are treated differently.

Without missing a beat, Jack pulled up a screenshot of a letter Michael Bennett wrote following an incident he had with the Las Vegas police department. 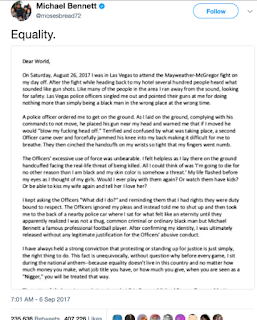 We ended up in a lengthy conversation about the racism that exists in our country and how hard it is to talk about it.

I shared with him how I am evaluating and trying to be more aware of my own racial biases that showed up when I took the on-line Project Implicit tests. (If you haven't tried these, I recommend taking the time to see how you do!) Maybe what worries me most is that we do have racism in our country, even within groups of people who we wouldn't expect it from. Maybe it's so hard for us to talk about it, to really look at it and dig in to inherent and unwanted biases that it's more comfortable to talk about the First Amendment and what it means to show respect for our country. Personally, I'd like to hit pause on the conversations about who took a knee, what other teams did, and whether our president has the right to tell their bosses to fire them, and instead talk about why anyone felt compelled to protest in the first place.

Slice of Life: The frustration of writing

A few of my colleagues from my MFA program started an on-line writing group, and we met last night. Some of these people are published authors, and all of them except me have completed their MFA program in creative writing. They've all written many critical essays, including one at least 35 pages long. They've also written over a hundred pages of a creative draft with the input of an experienced mentor.

We've all written a lot.

And yet, many of the questions and the input and the struggles boiled down to the same questions I ask my elementary aged writers:
During our critique sessions, the writer whose work we are workshopping is supposed to stay quiet; that person gets to speak and ask questions at the end. Last night, when our author had her chance to speak, she talked about how frustrated she was with this story that she's been working on for five years, and how she still can't seem to focus in on the heart of it. She's thinking about switching the entire draft from third person to first person--which is no small task-- and she's also thinking of abandoning it.

"I feel completely overwhelmed," she said, her voice raw with honesty.

Sometimes, I lose sight of how hard it is to write a clear and compelling story, and our curriculum (which is based on the CCSS) asks our students to do it at very young ages. When was the last time you wrote a story? Not a post, not an essay, not a blurb, not a lead, not a conversation, not a poem-- a full story, start to finish. I'm guessing many of us, by virtue of the fact that we are part of the slicing community, have written a story in the not-too-distant past, although maybe we haven't gone back and reworked and revised one. I'm guessing some--maybe many--of our colleagues who don't spend as much time on blogs and in notebooks haven't written a true story in a long time.

I give our children so much credit. Writing stories is hard. I need to remember that when I am working with my writers, young and old.

Slice of Life: "Her mother's hair!"

Kindergarten teachers have one of the hardest jobs I can think of for at least the first six weeks of school. Today, I spent time in a new teacher's kindergarten writing workshop. Because she had so many structures of workshop solidly in place, I got to see some of the writing these children were doing. Most of kindergarten writing involves talking and drawing at this point of the year, and I sat down with a little girl who was busy with her picture. She had three crayons in her hand-- a white one, a black one, and a brown one-- and she was using them to draw around a non-descript circle.

I resisted the urge to manage her use of utensils.

"What are you working on?" I asked.

She held up the three crayons to make sure I could see their colors. "My mother's hair," she answered.

How glad was I that I asked. I did sit down and showed her how she could draw stripes using one color at a time to produce the desired effect of highlights and lowlights.

"What a great observer of colors you are!" I said.

While kindergarten teachers may expend the most energy, they may also get to hear some of the funniest things kids say.

Slice of Life: Sorting through what to write

I'm sitting here at my friend's lake house listening to my husband, Jen, and Bill make breakfast downstairs. I've been debating what to write. I find that the more I have to write, the harder it is to get started. In the last week, I have:
Maybe the best focus is right here and right now, where Jen is interrupting my writing life with breakfast served on a tray--how lucky am I?!?! I'm taking this tray and heading downstairs to the chatter and warmth of their house in front of a misty lake. 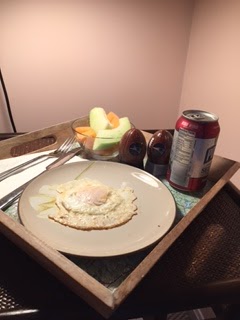 Posted by Melanie Meehan at 6:39 AM 9 comments: