Slice of Life- A reminder that sensitivity matters

Last week I wrote about some of the quotes I loved from my weekend in Atlanta at the NCTE conference. This week, I am writing about some of the words Margarita Engle shared during her powerful presentation about voice in nonfiction writing. Margarita is a Cuban-American novelist and poet, and her work has won many awards.

When Margarita spoke at NCTE, she talked of her concern for many children in the United States who are living in fear of deportation. Granted, we don't know what the policies will be regarding refugees, immigrants, and deportation. We are all in a wait and see mode as to what the new administration will do in 2017.  However, trouble is easy to borrow, especially when the stakes are high. For families who believe they may have to leave this country, the stakes are extremely high. Margarita's words made me realize what great fear and anxiety many families in our country are experiencing about their future.

Margarita had been excited to try out a writing prompt where she would ask children to think of an important memory, and then write that memory in present tense. As she described the concept, I was excited to think about trying it out. But then, she stated that she would not include this exercise in her presentations because of the potential danger it could pose for children and their families. Truly, my heart pounded when she said this, partially because I don't want to believe that any child in our country should live with this kind of fear, and partially because in my naivete, I hadn't thought about it myself, and I am the coordinator of our writing program.

I work in a relatively homogeneous school system, and I am embarrassed to admit that I hadn't thought about how some of our students' fears could impact their academic lives, especially in writing. In our narrative units, we encourage students to generate stories by thinking of emotional times in their lives. We ask them to write about important memories, people, and places. We ask them to provide windows into their lives. What if these windows are dangerous for our students? And even if they are not dangerous, what if our children or their families perceive that they could be?

More than any other time I can remember, this is a time for extreme empathy, cultural awareness, and sensitivity. I am grateful for Margarita's powerful words, as they reminded me to pay more attention, to be more vigilant, and to spread more kindness wherever I can.

Email ThisBlogThis!Share to TwitterShare to FacebookShare to Pinterest
Labels: #ncte2016, Slice of Life

Slice of Life: Top Ten Quotes from my NCTE notes

Attending NCTE definitely poses a challenge. This year, my flight left Hartford at 6am. I had to leave my husband with not only daughter responsibilities, leaf raking, grocery shopping, and house cleaning, but also with the challenges of a 9 week-old puppy. (He's really cute, but needs a 3 am potty break!)

But the hardest part of NCTE is the loneliness I feel on Monday. Anyone else feeling bereft? In order to gather my thoughts and re-experience some of my highlights, I have collected the top ten quotes in my notes. (are you appreciating the poetry?) While they do not even remotely capture the experience, it feels good to share some.


If you were counting, you might have found more than ten in this list. I tried to wean out two, and I just couldn't. In fact, there are many more I'd like to add. Maybe someone else will share some favorite lines--feel free to add some in the comments if you were there. You could also join the conversation if you had some favorites tweets coming out of #ncte16.

Email ThisBlogThis!Share to TwitterShare to FacebookShare to Pinterest
Labels: #ncte2016

Slice of Life: Some things are meant to be.

Most of my writing on this blog directly pertains to my work in classrooms. Today, I am sharing a story that I will be using as a mentor text in some of our fourth and fifth-grade classrooms.

Some Things Are Meant to Be.

Eight weeks ago and one day, my daughters and I sat in the kitchen. It was Clare's birthday, and my mother who lives with us had gone out while my husband had a late meeting. Perhaps things would have turned out differently if one of them had decided to be home for dinner that night.

In any case, our 15 year-old springer walked through the kitchen pooping. (She does that.)

"I am so sick of cleaning up geriatric dog poop," I said. "I'd really prefer puppy poop."

"I really wanted a puppy for my birthday," Clare said.

Eunice is the breeder who we planned to call when we were were ready for a puppy. With three old dogs in the house, it did not seem like we were ready.

Clare called Eunice. Eunice couldn't believe the timing. She had puppies that were two days old.

The phone call was a little tricky to explain to my mother and my husband, but eight weeks is a long time to get used to something. We had moments of worry. We tried to picture the old dogs welcoming a sharp-toothed puppy. We worked hard to convince ourselves and each other that everyone would be okay. We could handle this.

After many family debates, we decided to name our puppy Okie. When we were growing up, my father used to dress up in crazy outfits and knock on our front door when we had friends over. He called himself Okie from Pichokie and he showed up most when the moon was full. What I wouldn't give to have Old Okie show up at my door. We all miss both that character and his creator.

Last night we picked up Okie, and we drove our new puppy home under a harvest moon, the biggest, brightest moon there will be for years.

Some things are definitely meant to be.

At the beginning of the year, one of our district's Language Arts Consultants and I set a goal to work together and commit to having a book group with fidelity. It's hard. Other meetings get in the way. Busy lives get in the way. We haven't rushed it, and we've managed to keep the group going, reading and trying out some of the strategies and tools in the fabulous DIY Literacy by Kate Roberts and Maggie Beatty Roberts. At our most recent meeting, we didn't assign specific chapters to discuss; instead, we invited participants to bring shares. It was really exciting to see some of the tools these teachers have been inspired to make and use with their students.

Ginger Bowes is a third-grade teacher, and she had students make bookmarks to use as goal-setting tools. She introduced the concept to her students by showing them the charts from the Reading and Writing Project about retelling and envisioning.


From there, she showed her students the bookmark that she had made, having chosen the specific elements of the charts that she wanted to remember to practice as a learner.

Once Ginger shared her work, she asked students to design bookmarks that would specifically help them, telling her students that they were free to add pictures and use their own words so that their bookmarks would be useful to them.

I loved seeing some of the tools her students created! 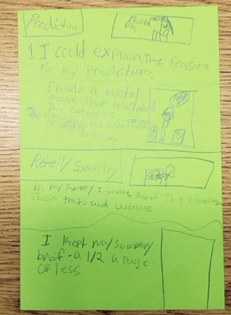 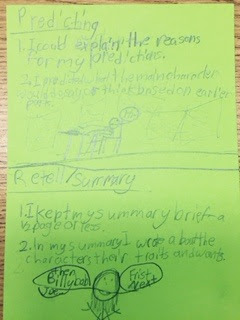 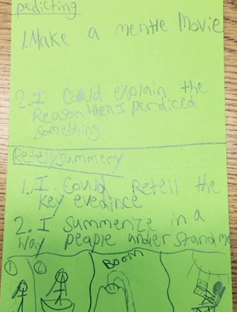 Posted by Melanie Meehan at 6:28 AM 4 comments: