Slice of Life: The Question Formulation Technique in Action

I work in a district that is lucky enough to have regular visits from Staff Developers who work for the Teachers College Reading and Writing Project. Today, we had Heather Burns work with our sixth grade teachers for the entire day. When I arrived just before lunch, she was sharing the elements of the Question Formulation Techniques with the teachers. I have done a fair amount of work within this concept, and if you haven't visited The Right Question Institute's website, I highly recommend it. The book, Make Just One Change by Dan Rothstein and Luz Santana is truly one that changes practice.

I have seen people use the QFT during reading, but not with the fidelity of the protocol and process that Heather used today. Before she went into the classroom to demonstrate for the teachers, she engaged them in the work. We had a short text that we all read, and then she shared the protocol of the QFT which as follows:

Step 1: Choose a focus
I have see the focus be an art object, a short video, or a picture. In today's case, the focus was a statement about the reading we were doing.

Step 5: Decide on next steps

Step 6: Reflect on what they have learned

Because Heather had the teachers engage in doing the work that we were about to ask students to do, the teachers understood the work at a different level. It reminded me of asking teachers to do the writing they are teaching students to do. When we have tried out what we're teaching, when we've paid attention to the metacognitive processes the work involves, and when we reflect on the challenges of the tasks, we almost always teach it better.

If you haven't tried out the QFT, I recommend exploring the website. It's an important way to engage students in their own learning and remind them that curiosity is an important habit of mind in a world where information is so easily accessed. If nothing else, ask yourself about how you foster and nurture curiosity, wonder, and the asking of questions within your instruction.

Slice of Life: A Super Bowl To Remember

There's been a lot to write about this week, and I've envisioned posts about several different topics for this morning. March is a long month, and I will be taking the annual Slice of Life Challenge. I'm sure all of my ideas will have their moments in the writing spotlight. This morning's post goes to the Patriots.

We are Patriots fans, so there was a lot to love about the 51st Super Bowl.

We began the night excited and looking forward to great food and a great game. Like many fans, we are superstitious about our game day behavior, and we always watch with the same friends. We had our traditional food spread, our garb, and our cocktails. We were ready. 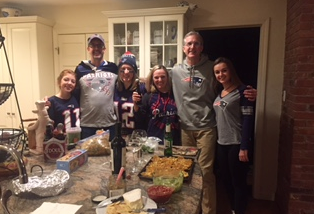 We weren't ready for the first half, though. Given our tradition of sipping Limoncello whenever the Patriots score a touchdown, our bottle remained unopened. By halftime, the fun factor was way down, the commercials were disappointing, and our daughter in Italy texted that it was 4 am and she was going to bed. "She can't give up," Bill said. "There's plenty of time left."

Larkin stayed up, and even though there wasn't plenty of time left, there was enough. I know there's a lot to say and a lot to learn about resilience, teamwork, and effort as it relates to the Patriots, not just during the game, but also throughout the season and the seasons before that. Bill Belichick, the head coach, shared some of his thoughts about the team and the season after the win:

"It certainly wasn't always perfect, but it was always a lot of effort, a lot of toughness, and a great will to improve and get better, correct mistakes, and just become a better player and a better team."    Bill Belichick after being presented with the trophy for winning the Super Bowl LI

I know his words would resonate in any classroom I work in.  (You can see more of his comments here.)

I also really admired the reflections of Lance Salyers who wrote about the Patriots in Forbes Magazine on Monday morning, and you can find his reflections here.  I'm sharing a screenshot of the Forbes Magazine's quote of the day from Receiver Julian Edelman. Edelman caught a pass in the fourth quarter that defied all odds and started the rally that led to one of the most amazing comebacks we'll ever see. 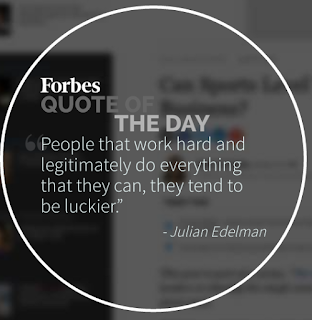 No question that the lessons from the result of the Super Bowl span well beyond the football field.

Posted by Melanie Meehan at 8:28 AM 4 comments: