Slice of Life: In search of lunatic

Hiking through Rocky Mountain National Park, Larkin, Clare and I listened to the banter of a group of boys--most likely campers--playing a word game. I'd forgotten about the game until I listened to them debate whether flan was a word, and then the rules for the game came back to me. You had to go around in a circle adding letters, always with a word in mind, but whoever completed a word would be out. Larkin, Clare and I started our own game, agreeing that the first one of us to complete the word horse would be the loser.

As we came upon a mountain lake, two men were taking a picture of themselves. I was struggling with how I was going to deal with the fact that I was facing L-U-N-A. (We agreed that luna seemed too foreign and we didn't have wifi to check whether to allow it or not. I was happy to be playing a game, and I didn't protest much...) I offered to take the picture, and I laughingly told them I needed a letter to continue the game--the only word I could think of was lunar.

They didn't seem to be contemplating my issue too hard; they were much more interested in the scenery and the photo. They even offered to take our picture as I kept winding my way through the alphabet in search of a word other than lunar. They took a great picture--one of my favorites-- and as they headed away from us, one of the men turned around.

Larkin would up with the next letter as we continued along our hike.

I have since played this game with many different combinations of people, and it's great for spelling as well as vocabulary development. It's even great for a laugh!

It's Monday! What Are You Reading? 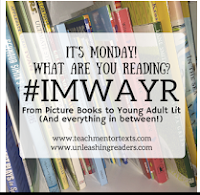 Jen Vincent at Teach Mentor Texts and Kellee Moye and Ricki Ginsburg at Unleashing Readers cohost It's Monday! What are You Reading? weekly on their blogs.  To see what others are reading and recommending each Monday, or to participate,  check out these blogs.
I always look forward to digging into my large stack of "to read" books during the summer! So far, here are two of my favorites from this summer.
Paper Chains by Elaine Vickers has been in my "to read" stack for awhile and I so wish I moved it to the top sooner! I loved this book and will be purchasing multiple copies for 5th grade teachers to use for book clubs in the fall! This book is full of social issues, friendships, family relationships, and more.  The main character, Katie, knows she is adopted, but doesn't know anything about her birth parents. She is afraid to ask her adoptive parents and is also scared to talk about this part of her life with her best friend, Ana.  Ana is also struggling with her own family issues since her dad left the family to play for a different hockey team.  Their friendship is strong and helps them through these secrets and challenges.  It is a book that you won't want to put down because you want to find out what happens next!

Checked by Cynthia Kadohata was also in my stack for a long time and I was hesitant to read it because it focused on hockey and sports books usually aren't my favorites.  However I really enjoyed it and am so glad I gave it a try! There is so much more to this book than hockey. The main character, Conor, is 11 years old and is extremely passionate about playing hockey.  His father is very involved in helping him practice hockey and supports him all the way since he is a former pro hockey player himself.  Conor's mother passed away when he was younger so he has a strong relationship with his father and the two of them share the same passion for hockey. Since hockey is an expensive sport to play, they face some financial decisions along the way.  In addition to loving hockey, Conor also loves his dog, Sinbad, who faces some challenges during this book that bring them even closer.  I have some 6th graders in mind that will love this book in the fall!

Email ThisBlogThis!Share to TwitterShare to FacebookShare to Pinterest
Labels: What are you reading
Newer Posts Older Posts Home
Subscribe to: Posts (Atom)