Are There Lessons From a Controversial High School Tradition? 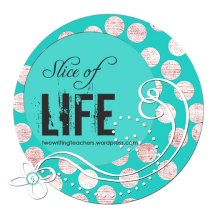 On Tuesdays, Ruth and Stacey host Slice of Life on their blog at twowritingteachers.wordpress.com. Feel free to write, link, and/or comment!

Assassin has come to our house.

For those of you unfamiliar to the game, this is the high school tradition where they pair up, pay $20 to play, and are given teams to try to shoot with water guns before the teams who are after them can douse them first. The winners get the money which is a substantial sum--I believe that the purse is over $800 this year.

I would support banning this game for many reasons. Mostly, I worry about the safety of these teenagers because they will go to great lengths to get each other. While they are not allowed to chase anyone in a car, they are allowed to stalk, restrain, lure, and lie in order to move on in the tournament. I could continue to make my case against Assassin because of the distraction that it provides at the end of the marking period during a year when grades matter a lot. I could also bring up the fact that Obama was in Connecticut, fifteen minutes from my house, to talk about gun laws and my peace-loving daughter is making sure that her water gun is within reach whenever she goes out. I could also mention that our high school principal sent an email to parents reminding us to talk to our children about the rules and the common sense that must accompany playing in the game.

However, I will try to find the lessons that I can about teaching. You should see how motivated these teenagers are and the skill sets that they are using to strategize and try to win. I don't think that this is really about the money because the chance of winning is so small; the motivation comes from the competition. Listening to the conversations that all of her friends are having (and they are ALL talking about this) they are collaborating, communicating, and thinking creatively. Yes, I wish that their conversations had a different focus, but they are forming alliances with people they don't normally work with, trying to think of other perspectives, paying attention to details, and studying patterns. Hmmm. These skills sound familiar. And important.

I was talking to my husband about how schools could incorporate some of these Assassin strategies into learning. What if:

I think that I could continue a list, and I could tailor it to specific grade levels. The TedTalk, Build a School in the Cloud by Sugata Mitra supports inquiry-based learning and the concept that if we give students complex problems and ways to figure them out, they will learn much more than we would have thought. I also think about Tony Wagner's claim in his book Creating Innovators that engagement and high learning rates happen when people have passion, purpose, and play. Assassin presents teenagers with a complex problem and passion, purpose and play. How can we transfer this high level of motivation and engagement into classrooms?

Posted by Melanie Meehan at 6:12 PM

Email ThisBlogThis!Share to TwitterShare to FacebookShare to Pinterest
Labels: engagement