It's Monday! What are You Reading?

This past week was our April vacation so I was able to make a dent in my stack of books to read.  Below are some of the books I read this past week: 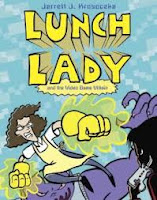 My class was very fortunate and lucky to win a signed copy of Lunch Lady and the Video Game Villain #9 by Jarrett Krosoczka before it was published! It comes out this week on store shelves so definitely pick up a copy.  I love the Lunch Lady books and have read them all so I was equally as excited as my kids in classroom to get my hands on this book to read.  Of course I had to sneak it to read it one night because it was always being read by one of the kids during the day - never made it to shelf in class library! The ending in this book leaves you in complete suspense so I can not wait till book #10 to find out what happens to Lunch Lady and Betty!

I also read Stranded by Jeff Probst and Chris Tebbetts.  One of my students, this year, loves the show Survivor so he was so excited to find out there was a new series out by the host. This is the first book in the series and it will hook reluctant readers who enjoy reading survival books and being in suspense. Along with the survival theme of the book, there are also social issues. The main characters are four kids who are now related by marriage, two from the mother and two from the father in a new blended family. The parents are on their honeymoon and the four kids are traveling on the uncle's boat together.   The goal of the trip is for the four kids to bond and begin to like each other or at least be civil to one another. While they are at sea, there is a huge storm that drastically changes their travel plans and the survival begins...

The Center of Everything by Linda Urban is a beautifully written book.  The main character, Ruby Pepperdine, is an 11 year old girl who is anxiously awaiting her twelfth birthday so she can have her wish come true as she reads her winning essay at the Bunning Day Parade in town. She is a superstitious girl who perseverates on things she has said or done in the past and has the "should have, could have" thoughts in her head. In particular she misses her grandmother Gigi and wants to relive the last moment she had with her before she passed away because she regrets the moment.  She is hoping that her wish will be granted on the day of the parade as she reads her winning essay.  The Bunning Day Parade is a town tradition and means a lot to her family and to her grandmother Gigi.

Flying the Dragon by Natalie Dias Lorenzi is a powerful story about a young girl named Skye who was born and lives in the United States and her cousin Hiroshi who has always lived in Japan.  Skye's father is Japanese and lived in Japan until he married her mother and moved to the United States.  Since Skye has always lived in the U.S., she considers herself American and not Japanese.  In fact, she even changed her name from Sorano to Skye to "Americanize" it.  She eats American food and only speaks Japanese once in awhile when her father makes her, so it is pretty rusty.  There are big changes when Skye find out her grandfather, uncle, and cousin, who she has never met before, are moving to their neighborhood from Japan.  Her father has not seen or talked to them in years because of a family disagreement so he is excited to bond again with his family members.  Since they only speak Japanese, Skye must go to Japanese school on Saturdays to learn the language better so she can talk to her relatives.  As Skye is struggling to learn Japanese so she can be Hiroshi's translator at school, Hiroshi is struggling to learn English and to fit in to a brand new culture.  Both of them are not happy at all under the circumstances and at first take it out on one another.  However, they begin to have realizations and things begin to change... I love how this book rotates between a chapter from Skye's point of view to a chapter from Hiroshi's point of view.  That set-up really ties the book together nicely. 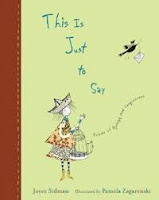 I also read the poetry book, This is Just to Say: Poems of Apology and Forgiveness by Joyce Sidman. I have had this book in my classroom library for years, but for some reason it slipped through the cracks and I never read it cover to cover.  I loved this book and can't wait to read it aloud to my class this week! I love how on one page there is an apology poem for an action and then on another page there is the forgiveness poem in reply to the apology - very clever poetry book!
Happy Reading! :)

Posted by Melanie Swider Wenz at 8:09 AM