Last week, I was teaching in a fourth-grade writing class, emphasizing the importance of planning. However, when the students went off to work independently, many of them struggled to create timelines. As we conferred with the students, we both kept hearing blurry stories about Fenway park, the family dog, a Disney trip, the day I went fishing... Who did what? I kept asking. What's this story really about? Even though the teacher had taught the classic watermelon and seed lesson, many of these students still did not understand the concept of a small moment, making it extremely hard to create a timeline. Both the classroom teacher and I recognized that we had to do more work around teaching the concept of small moment.

When Melanie Swider teaches summaries, she teaches students to use the formula somebody wanted...but...so...and...  I started thinking about how this formula could work to teach students how to independently evaluate whether their writing ideas are, in fact, small moments. The next day, I returned to this same classroom. The teacher had planned a lesson to teach knowing what your stories are REALLY about, but she welcomed me to try out a new strategy for focusing students' thinking with this formula. To demonstrate, I put some of my own stories into the template of: 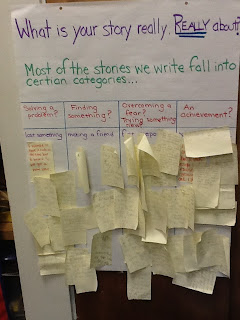 Because the teacher was not planning on me--we had done this spontaneously--she had been planning to teach the lesson about what is your story REALLY about, so she had a chart ready to go. We had students write their own story recaps on post-its, then invited them to put their post-its up on the chart. What a lot of writing energy this generated! The post-its added an element of play, as well as publicity. All of the post-its on the pictured chart are student generated "pre"-caps of their stories. The particularly useful thing is that the students can re-claim, sort, and select their post-its, as they move into developing plans and story drafts. The other unintended benefit was how motivated students were to have their work on display. Students who typically hadn't written much the day before were writing multiple post-its because they wanted their work on the chart. In hindsight, I wish that we had used different colored post-its and had students put their names on their post-its right off the bat.

Tony Wagner writes about the three p's--passion, purpose and play-- for high student engagement in his recent book, Creating Innovators. I would add post-its and publicity!

Posted by Melanie Meehan at 1:15 PM