Heading from Zone Defense to the Zone of Proximal Development 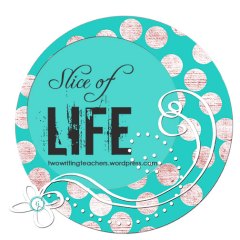 As always, I am grateful to the community that exists within Twowritingteachers.wordpress.com. They motivate, teach and inspire ALL the time. Please feel free to join the slicing community by posting or commenting. Everyone is welcome!

Over the weekend, I enjoyed a basketball game that my sixth-grade daughter was playing in. Last year, she played on the travel basketball team since her  sisters both had done so, and she wanted to be like them. She's not.

Last year, she did not touch the ball too much, she never took a shot, and if she ever did get the ball, she would give it up as quickly as she could. I don't think that she improved much, although she was on the basketball court four days a week. Actually, she might not have improved at all. This year, we decided that she would play on the recreational team, a much less competitive, less intense basketball experience. On Saturday, she rotated in  as the point guard. She set picks, called out plays, drove for the hoop several times, and took several shots, two of which went through the hoop. I have not gone to all of her games, so when I do, the improvement in her play is  more apparent to me. And,  more importantly, she is having  fun.

Reflecting on Cecily's basketball experience took me away from thinking about  man-to-man or zone defense and into thinking about the zone of proximal development and its importance when we are trying to teach anything.

Last year, Cecily was frustrated and disheartened playing on court of much stronger players. She did not pay much attention to the game when she was on or off the court, to the frustration of my husband and the great concern for me. This year, she is excited and trying hard, always focused on the game, and playing on a court that has a bunch of teammates and competitors who are at about her same level.

Reminds me of classrooms...

When we ask students to do activities that are way too hard, rising up to the occasion might not happen, and actually, probably won't. The best learning happens when we are just at the edge of our comfort zone, that powerful zone of proximal development.

Posted by Melanie Meehan at 6:10 AM