A few years ago, I read Mindset by Carol Dweck and it completely lifted the level of my thinking as an educator and learner.  I immediately wanted to teach the concept to my students that year and make them aware of their mindsets as learners.  To read all of my posts I wrote about mindset and teaching students about the difference between a growth mindset and fixed mindset, click here.  To read my post that describes the difference between the two mindsets and my first introduction to students about the concept, click here.

Ever since I read Mindset by Carol Dweck and read additional books about the concept, I always introduce the concept to students during the first week of school through read alouds.  We read picture books with characters who demonstrate perseverance, along with characters who may want to give up at the beginning, but then realize they CAN do it in the end. I always read The Dot on the first day of school to begin these important conversations by talking about Vashti and noticing how she didn't think she could draw at the beginning, had little confidence in herself, and became very frustrated.  Then we discuss how Vashti changed at the end and began to work harder and built up confidence in herself as an artist.  This discussion leads us to the power of the word YET and how when we can't do something, we should say, "I can't do this YET" instead of "I can't do this."  See our class chart below for The Dot by Peter Reynolds. 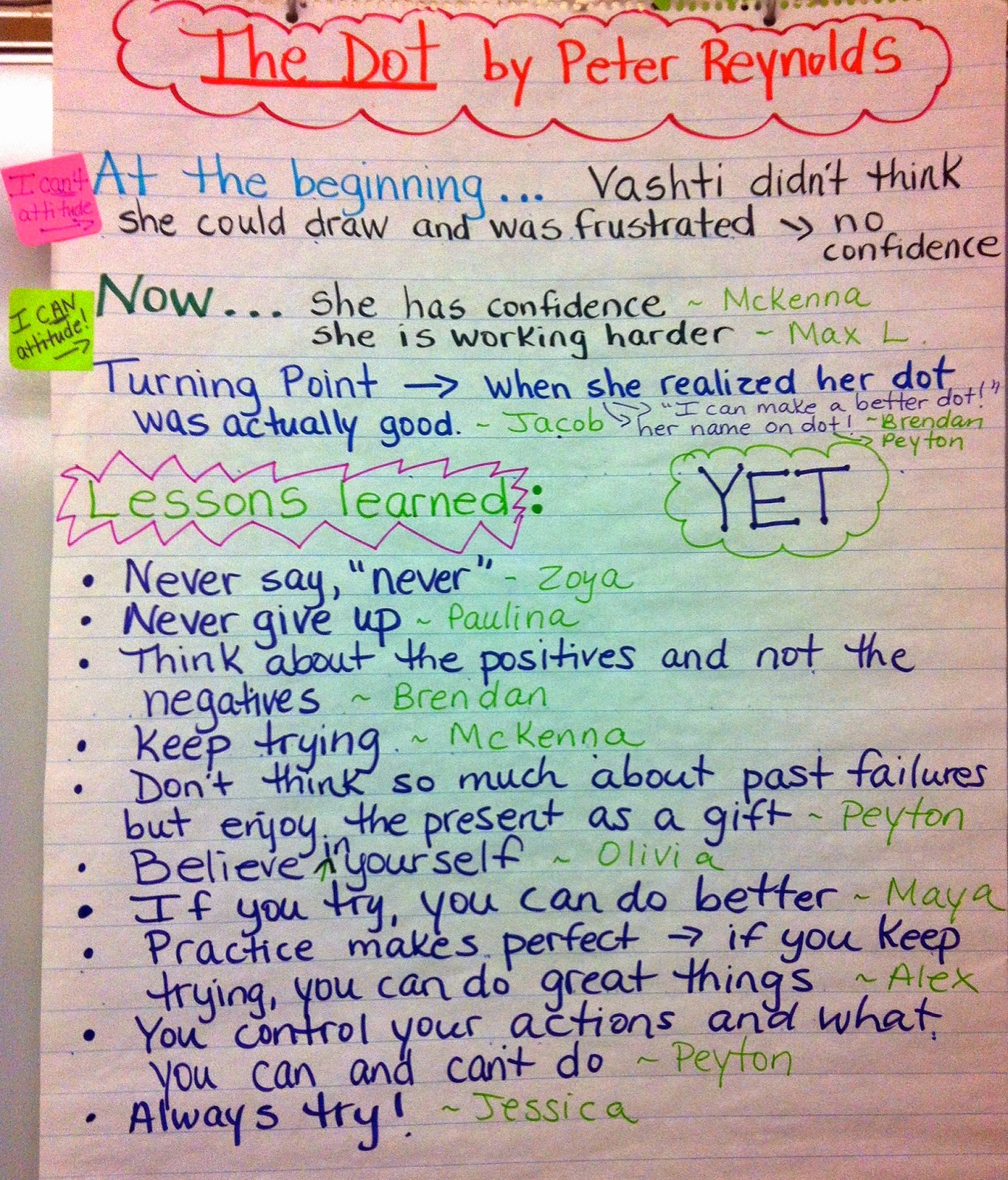 In addition to The Dot, I also read aloud a new book, The Magnificent Thing by Ashley Spires, that I came across this past summer.  This is a perfect picture book to read aloud to discuss perseverance - what it looks like and sounds like.  It also reinforces that making mistakes and failing is part of the learning process and that you should keep trying and put in 100% effort into your goals and dreams.  In this book, the character has an idea that she wants to make something magnificent, but each time she tries it doesn't come out the way she pictures it in her mind.  Even though she continues to fail multiple times, she keeps on trying.  Even though she still gets frustrated and thinks for a second that she should just give up, she doesn't. This is a powerful read aloud to discuss perseverance and growth mindset. 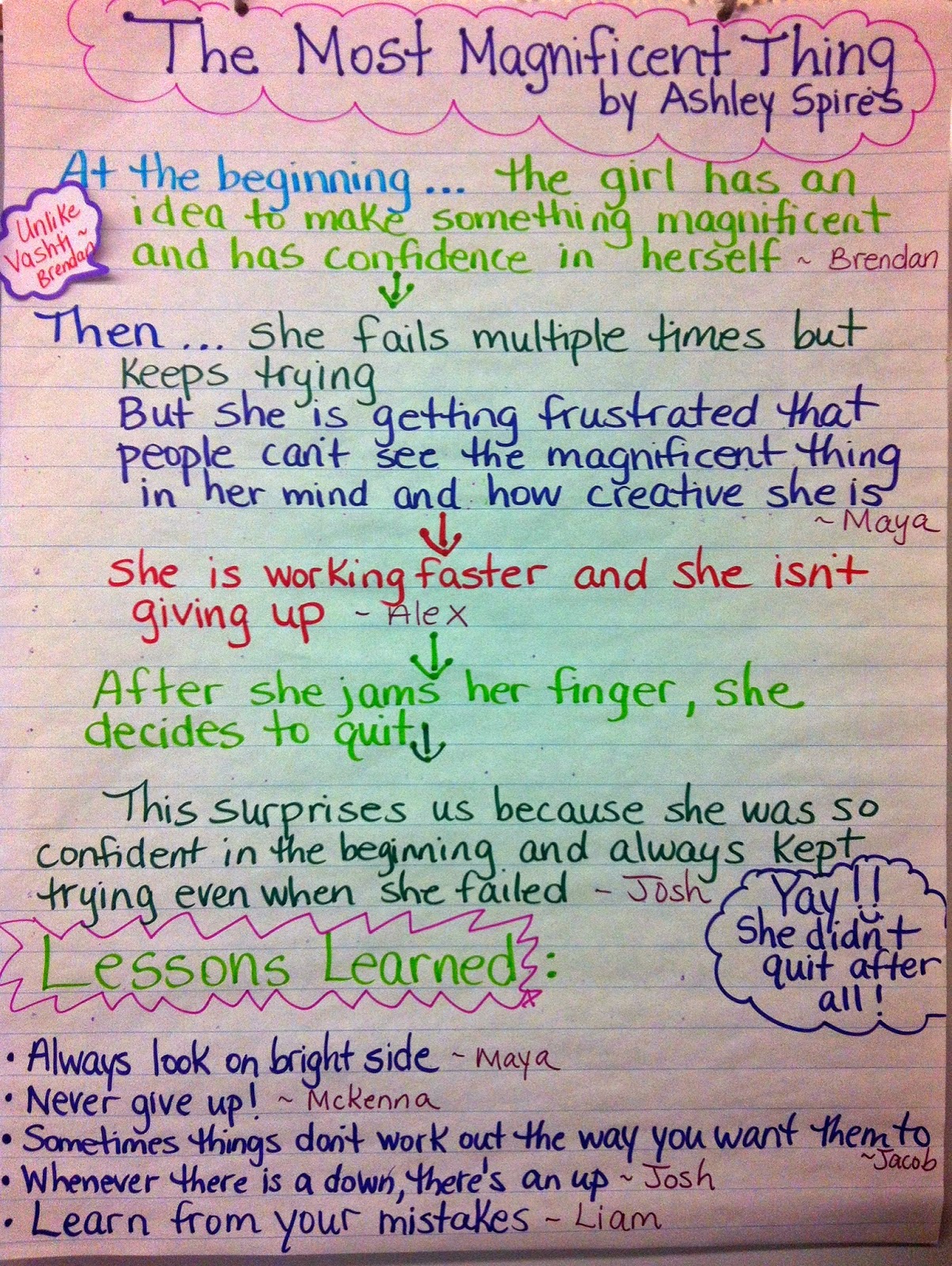 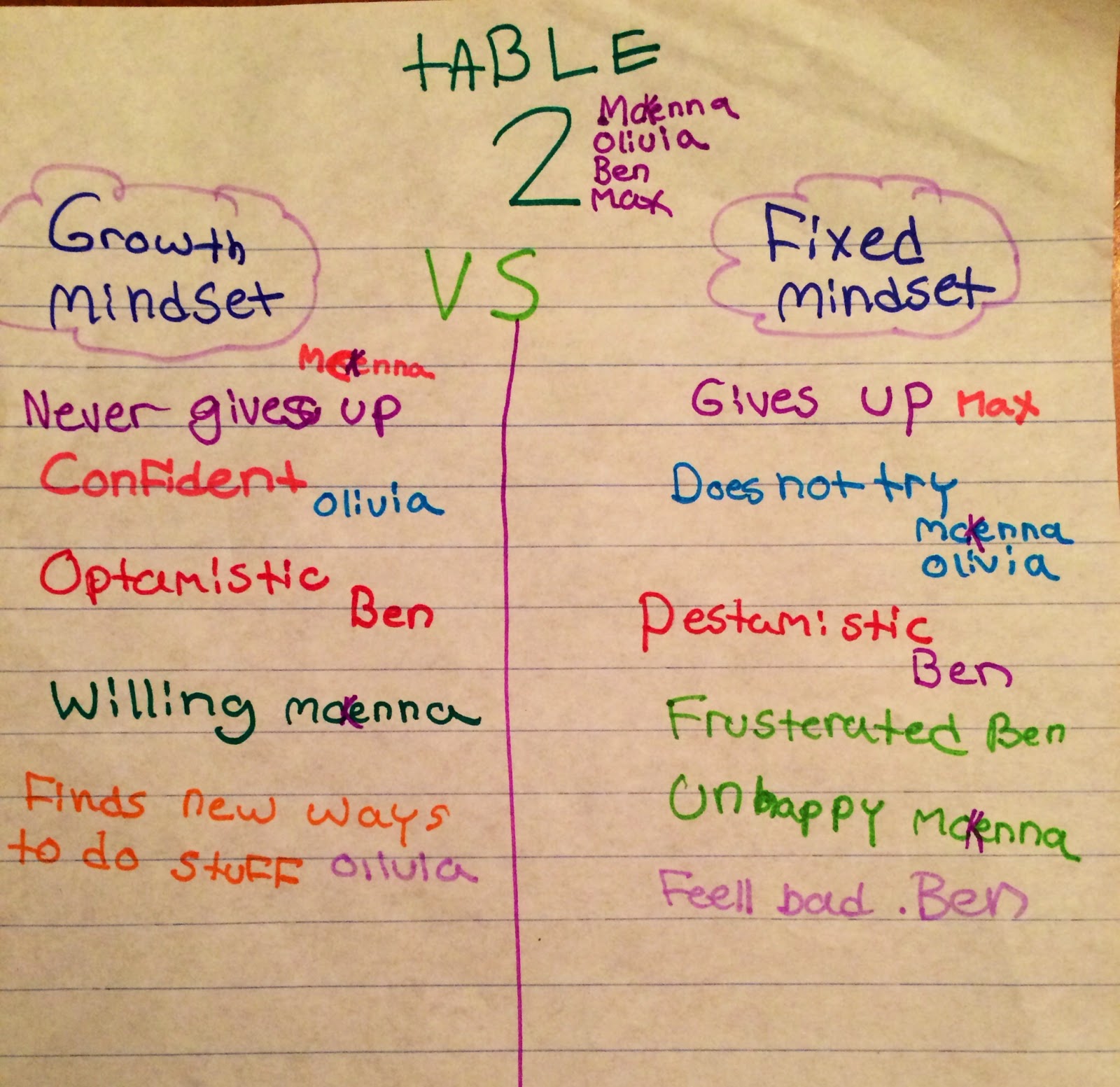 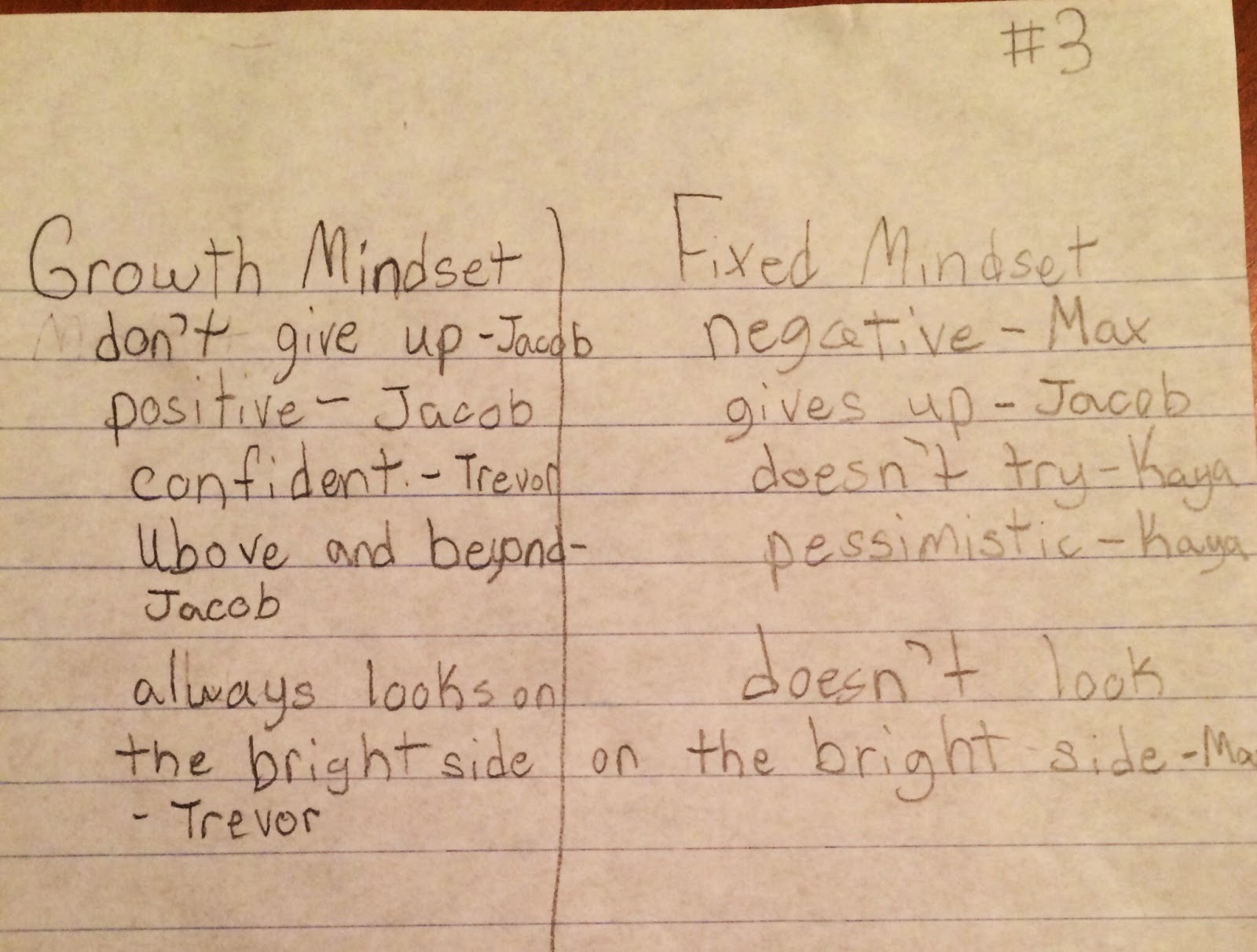 After groups have time to discuss the differences between the two mindsets and jot down their thinking, we share ideas as a whole class.  Below are two charts we created to compile the students' thinking about the two mindsets. The first chart is our draft that I jotted quickly as students shared out, and the second is the one we have hanging up above our smartboard in the front of the class as a reminder to strive to have a growth mindset as learners. 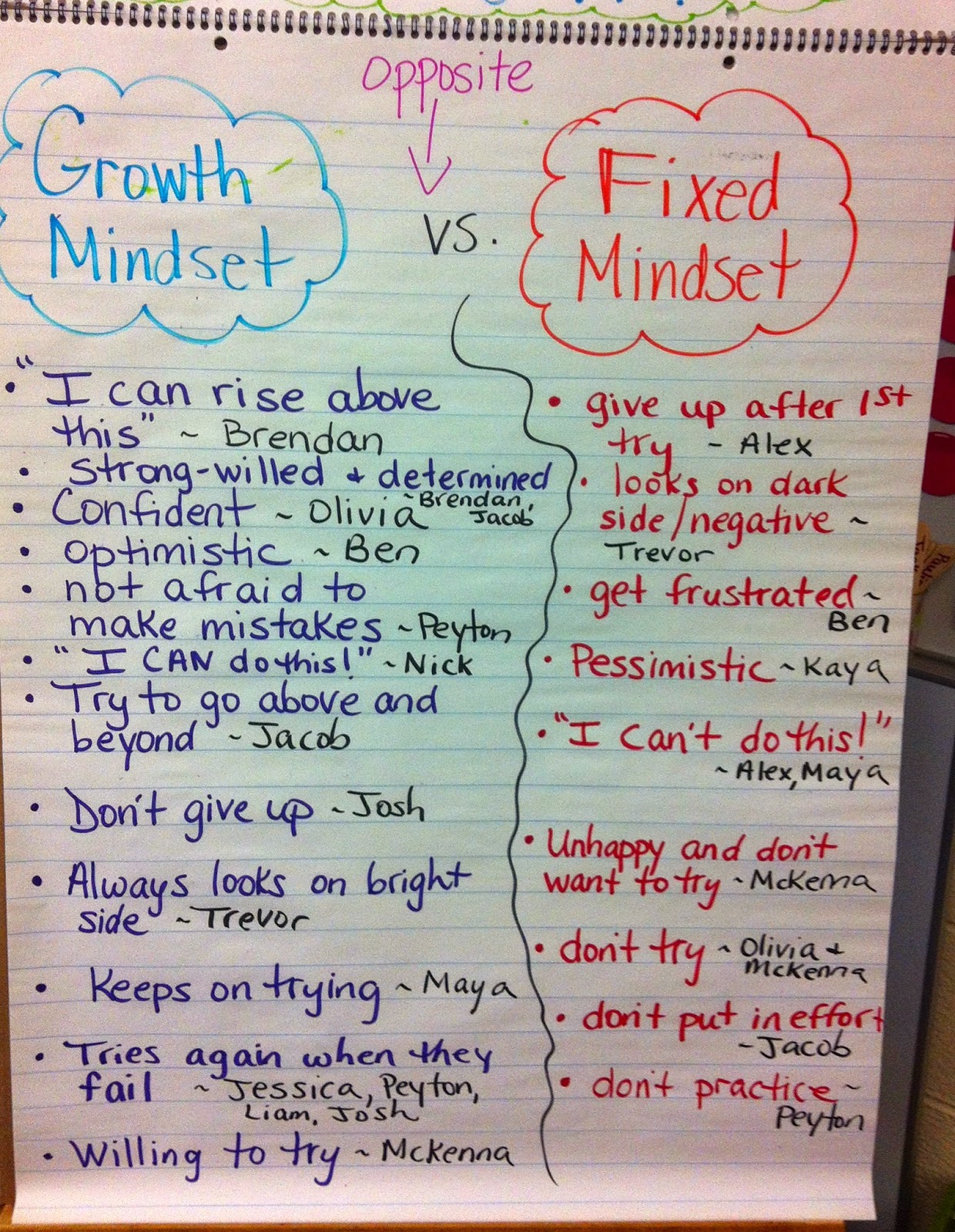 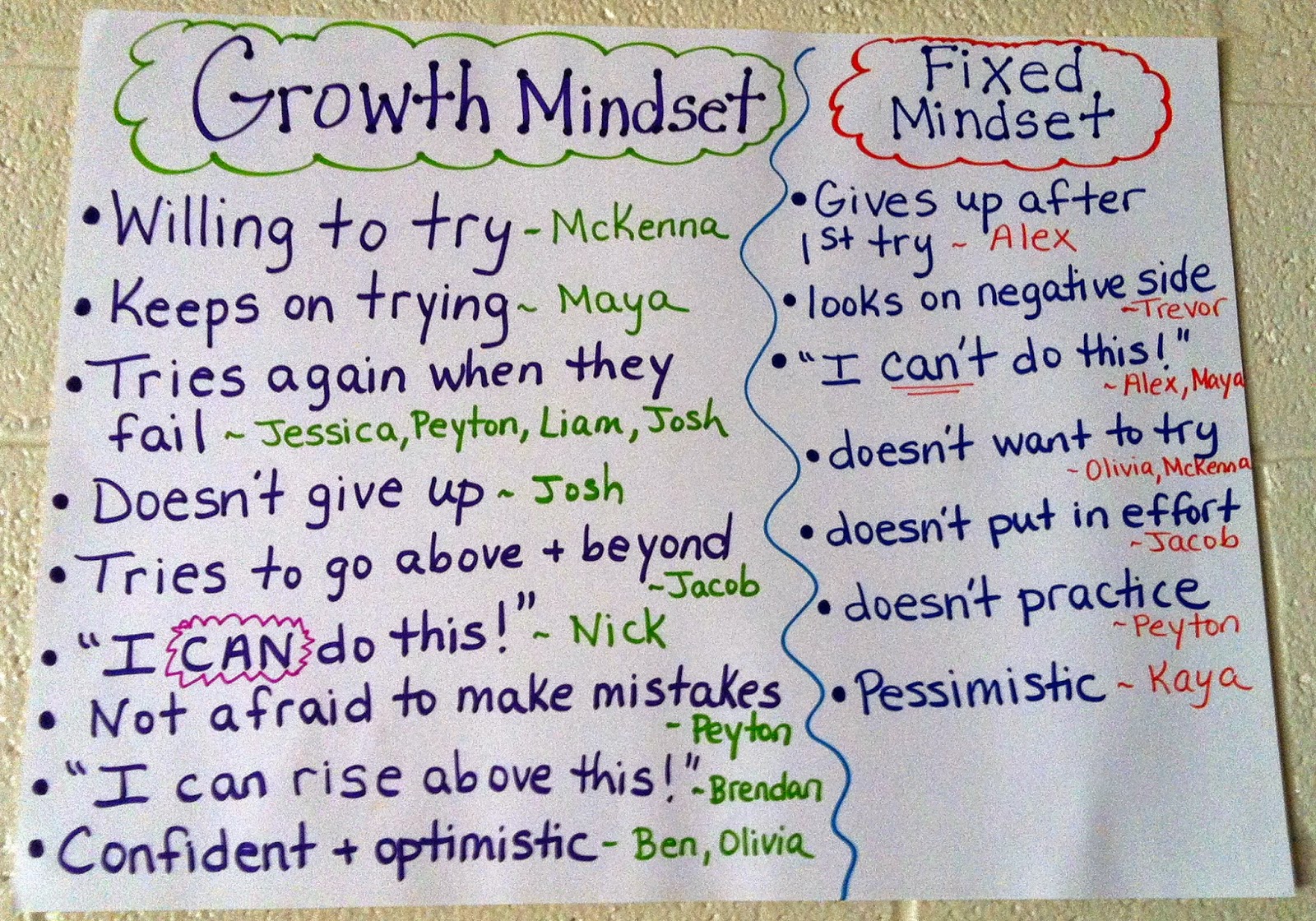 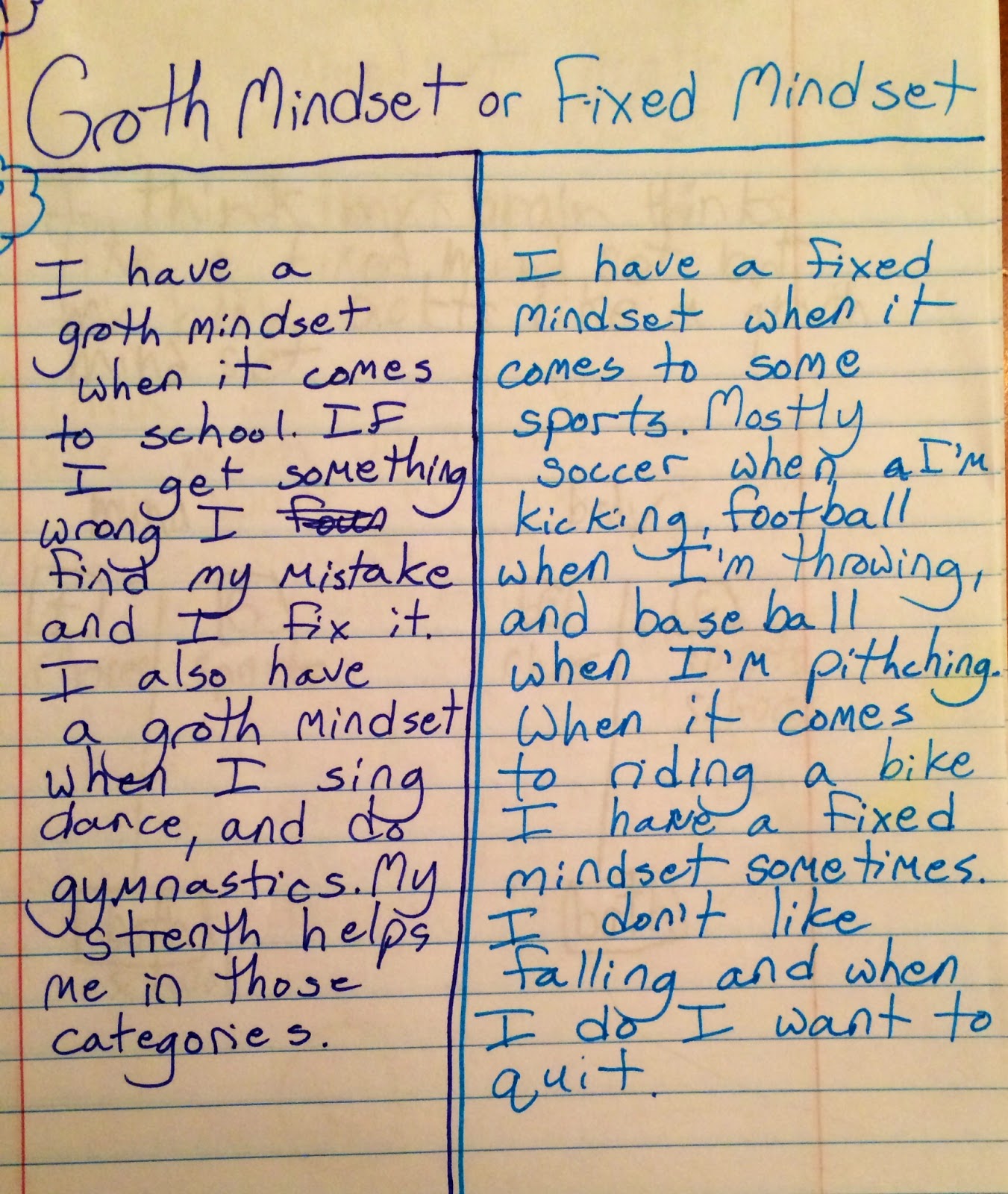 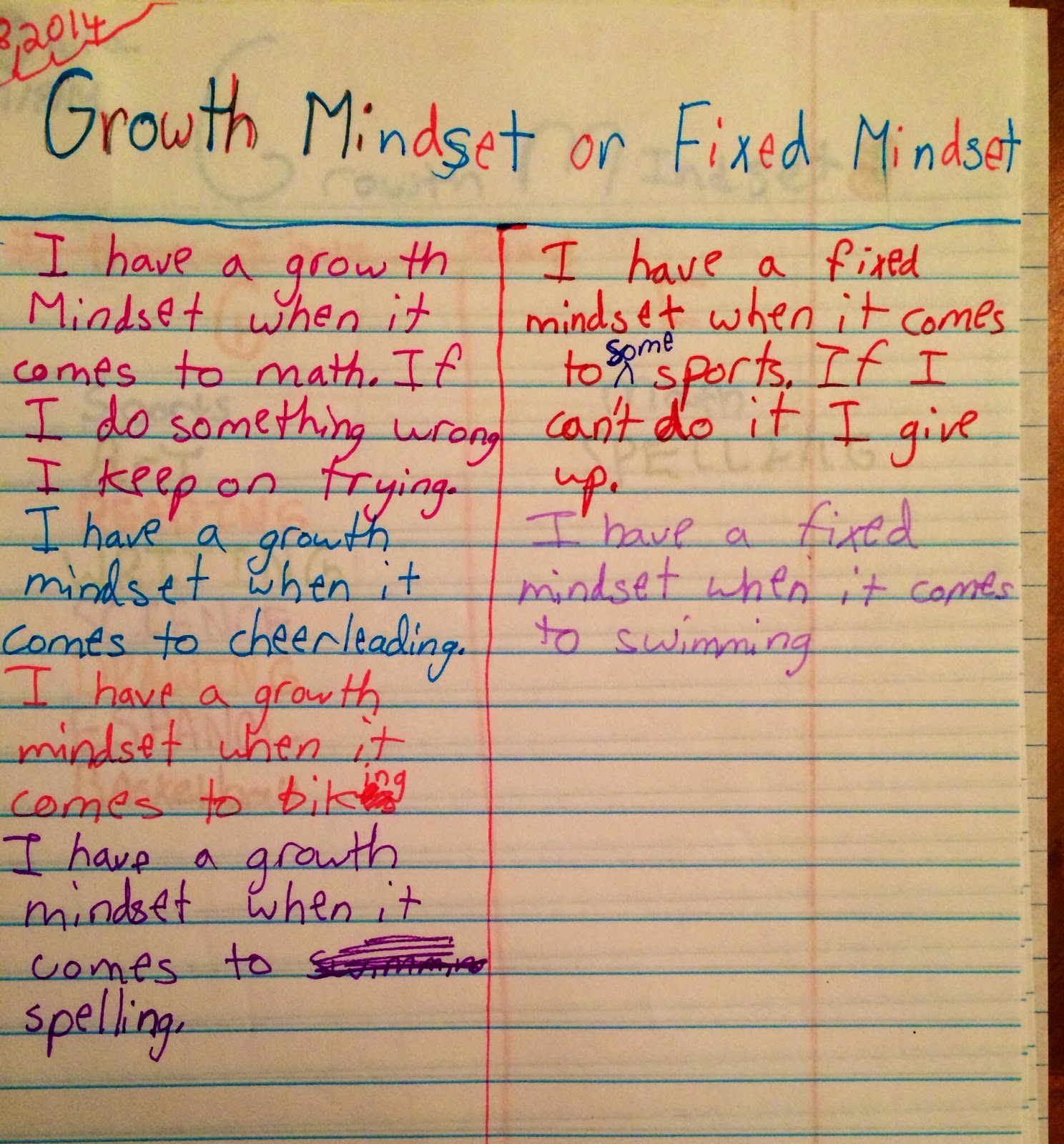 In addition to conversations and reflections, we also consistently talk about mindset during our read alouds throughout the year.  For example, this week we are finishing our first chapter book read aloud, Fish in a Tree by Lynda Mullaly Hunt, and students have shared their thinking about the characters' mindsets and noticed the word "Grit" that Mr. Daniels used and how it is connected to growth mindset and perseverance.  Below is one of our 5 charts we created during our read aloud for Fish in a Tree that  shows some students' thinking about mindset. 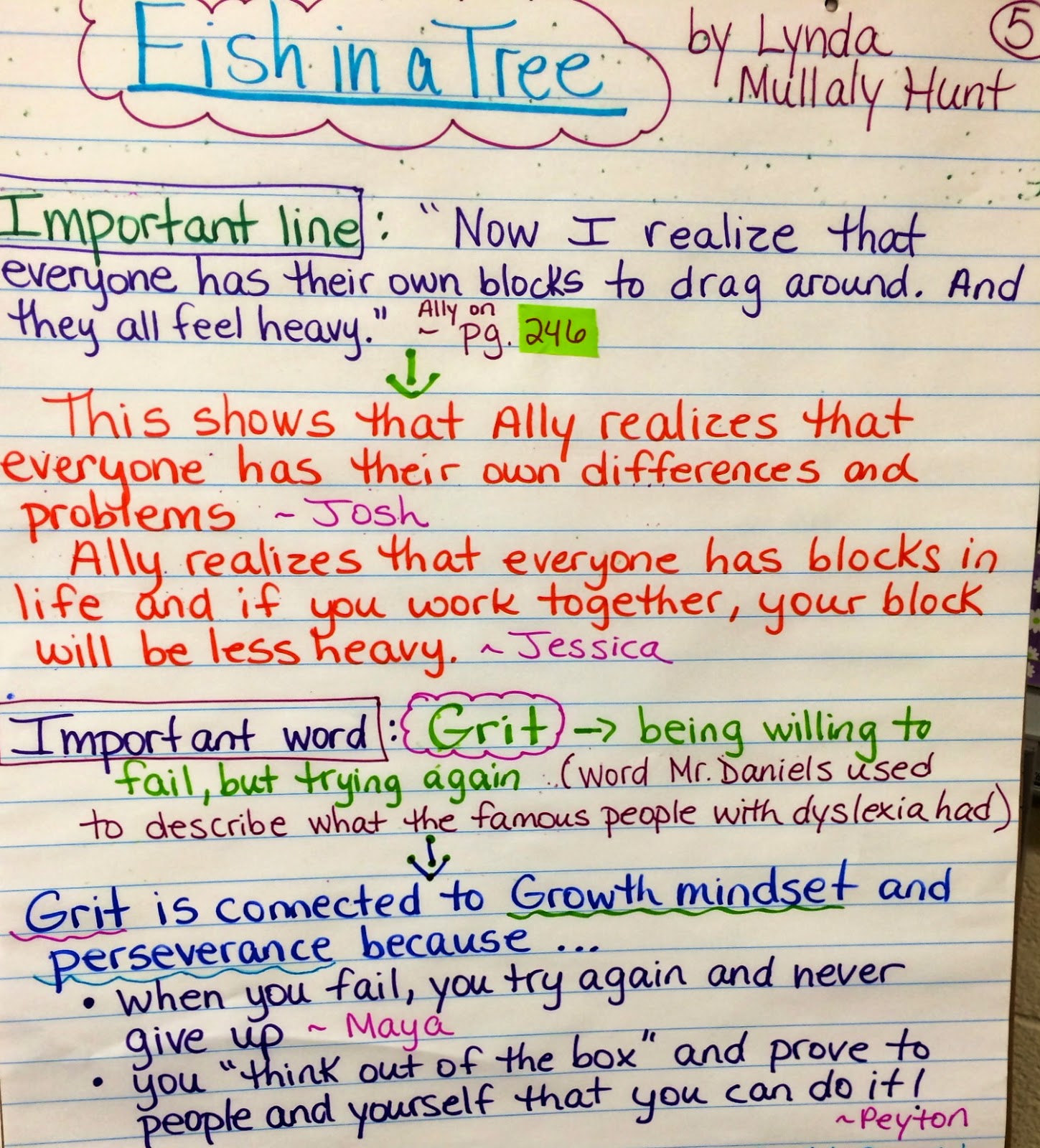 If you have not read Mindset by Carol Dweck yet, I highly recommend that you add it to the top of your stack to read.  Ever since I read it a few years ago and began teaching and discussing the concept of mindset with my students, I have noticed the positive impact it has on my students as learners and individuals.

Stay tuned to hear more about how we are discussing mindset and striving to have a growth mindset in our classroom! :)

Posted by Melanie Swider Wenz at 6:08 AM