The Slice of Life Challenge is hosted by the inspirational writers of Two Writing Teachers. Each March, they invite people to join them in a commitment to write every day. Here's to another year of daily slicing!


One of the most challenging things for fifth-graders is to begin to develop their sense of logical thinking. By logical thinking, I mean their ability to build an argument. In order to build an effective argument, we have to create reasons and then support those reasons with evidence. I tell the students that it's like a pyramid with the claim on the top, the reasons on the second layer, and the evidence at the bottom supporting the reasons. Somehow the effective linking of a claim with the word because with a reason is extremely difficult for elementary students--sometimes it's difficult for adults, as well. I once heard someone say that because is one of the most misused words in the English language, and I didn't understand what she meant at first. However, now that I study how children learn to construct arguments and how hard it is to teach effective arguing, I understand how the meaning and use of the word because is a challenging concept.

Today, I guest-taught in a fifth-grade classroom, and they were preparing for a debate about whether or not their school should serve chocolate milk. This has become a popular debate in workshop-oriented classrooms because it is at the core of Teachers' College fifth grade argument curriculum.

I made a chart to try to guide the students into thinking within categories of reasons, as opposed to lists of evidence. An important differentiation to make with students is the difference between why, what, and how. When we answer the question of why, we are usually in the land of reasons. I called these why questions, and I taught the students that the answers to these types of questions go with the word because. 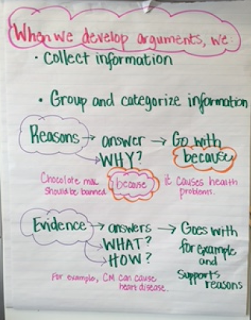 I tried to even develop a formula for them to use to test their reason. If their claim couldn't connect with the word because to their reason, then chances were high that what they thought was a reason was actually evidence. One girl understood that I meant when I wrote the following "equation" for her:

CLAIM + BECAUSE+ AN EXPLANATION= A REASON

Evidence is important, and I kept that clear as I worked my way through this chart. Sometimes evidence can even work as a reason. For example, in the above chart, the fact that chocolate milk can cause heart disease could work as a reason if the arguer wanted to keep saying more about heart disease, and it could also work as evidence if it is supporting the idea that chocolate milk should be banned because it causes health problems. The important distinction is that evidence answers the questions what or how.

During the half hour of work time the students had, they began to sort their information in much more meaningful ways, thinking about how the puzzle of reasons and evidence could all fit together to support their claim. Arguing and logic are such important skills, and it's fun to watch students begin to understand the power of a strong argument.

Posted by Melanie Meehan at 6:53 AM