Screen Plays in the Writing Process

This week, we began our Choice Unit in writing workshop. Mel Swider posted about this the other day in The Power of Using Mentor Texts in Writer's Workshop. Students are allowed to choose the genre of writing they want to do. As an introduction to the students, we offered several suggestions--newspaper articles, brochures, short stories, poetry, essays, feature articles. Two of our more resistant writers put their heads together and announced that they wanted to do a play. Not having much experience in teaching play writing, we pulled up techniques and mentor texts for them from some various websites. 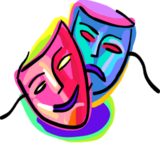 I watched them struggle with thinking of the plot in conjunction with writing in an unfamiliar style and I asked them repeatedly what was going to happen in their play. “Think of stories,” I said. “You still have to have characters, settings, a plot, a resolution--”

During our choice unit, three of our students decided that they wanted to write a play for their independent piece. I sat down to coach them and quickly realized that teaching them a whole new genre in conjunction with ensuring that they developed a story would be a challenging task. Did I mention that two of the three have historically been reluctant writers? Okay, more of a challenging task...

We spent some time together looking at some mentor texts that we found on-line so they could really see the structure of a play. Then they started talking about some fairly complicated plots they had in mind to produce on stage. “Do authors write the play or the story first?” Cristina asked. A lightbulb went off for me at that point. Plenty of great plays and movies are adapted by specialized playwrights.

At first, Mel didn’t love the idea of them adapting a picture book into a play. She pointed out that they may think they can just copy the text and not be creative in the writing proces. She was right but they were so invested in the idea that I convinced her to let them continue to try with direct instruction and coaching.

The four of us sat down and began to plan how we would translate Thank You Mr. Falker by Patricia Polacco into a play. Together, we studied the text and analyzed the time passage and the changing setting. We agreed that we would not be able to have a play that spanned from the first time that Trisha struggled in school so we created dialogue that Trisha could have with her mother that would provide an audience with that back story. Using visualization strategies, the students drafted a description of the setting. Imagining how the characters were feeling, they parenthetically wrote in gestures and body language that would demonstrate those feelings. Together, they read and re-read the text to select lines that were critical to include.

“This is a lot harder than just copying the dialogue,” Andrew said. “You actually have to really think about the whole book.”

“Uh-huh,” I thought to myself. Mel overheard this part of our conference and the two of us exchanged looks.

For the next two days (and nights because for probably the first time this year, Andrew really worked at home on his writing), Andrew focused on adapting Ish by Peter Reynolds to be a play. When I conferred with him, he toured me through the text and explained his decisions to omit and expand certain parts. He had found a mentor play that had included parts for a narrator and he wrote summaries for the role of a narrator.

“I left these two pages out because I’m not sure how to include them,” he told me. This from a child who had recently resisted including supporting stories in the body paragraphs of his essays and had taken until December to read a book from cover to cover.

Together, we talked about how he could develop dialogue that would show how frustrated the main character, Ramon, became with his drawings.  I also pointed out to him the places where he had the narrator telling the actions of the characters. In some places, he had copied these lines from the text. With some coaching, he began to independently cross off the parts that showed action and replace them with stage directions for the characters.

At the end of writer’s workshop, Andrew was disappointed it was over and he brought his notebook home to continue to work on it. I’m not convinced that screenplay writing will trump weekend activities but I will say that a previously resistant writer was engaged in some fairly high level thinking about a book and the writing process. He has a vision of producing and videoing his play and we are excited to support him! Stay tuned!
Posted by Melanie Meehan at 5:24 PM