This is the 10th year that Two Writing Teachers has hosted the Slice of Life Challenge. Thirty-one days of writing during the month of March, here we go!

We have now been teaching argument essay a la chocolate milk for several years. (For those of you who aren't familiar with what I mean with the chocolate reference, it's the main teaching topic that runs through the unit developed by Teachers College Reading and Writing Project. The Units of Study for both reading and writing contain several lessons which center on whether or not chocolate milk should be served in schools.)

Every year, I am struck by how some students grasp the concept of arguing with reasons and others struggle to differentiate between reasons and evidence. And every year someone comes up with something that even blurs the line for me, as well. The fifth-grade standards add that key term about logic, and the correct use of the word because lends itself well toward addressing that extra challenge.

I've made a few charts about this concept, and the one I'm sharing is my most recent.  A teacher I work with co-created this one with her students, and they found it useful, so I am sharing it here as well. 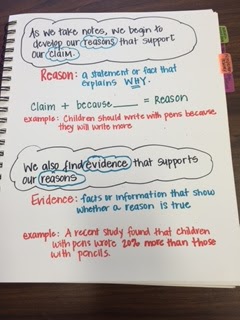 Most children learn about the concept of why early in their lives, so teaching them by way of the differences in why, what, and how questions is also helpful. If I were going to add something to this chart, it would be that evidence-oriented questions tend to answer what or how.

Logic is tough, and the word because is a frequently misused word, and not just by parents who are frustrated by their toddler and lean on "because I said so." If others have discovered an effective approach of guiding students toward independence in the differentiation between reasons and evidence, please share!

Posted by Melanie Meehan at 7:21 AM