It's Monday! What are You Reading? Eight Keys by Suzanne LaFleur 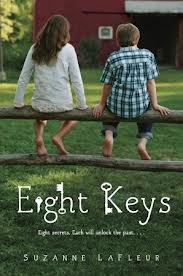 I read a few different books this past weekend, but one of my favorites was Eight Keys by Suzanne LaFleur, who also wrote Love, Aubrey which is another powerful story.  If you read and loved Jeremy Fink and the Meaning of Life by Wendy Mass like I did, then you will love Eight Keys!

It is a powerful and inspiring story about a young girl, Elise, who lives  with her aunt and uncle because both of her parents passed away by the time she was three years old.  She is in middle school and facing challenges with one girl in particular who is making her school life miserable. She is also struggling with keeping up with school work and keeping her friendship with Franklin, who she has been friends with forever. Before Elise's father passed away, he wrote her a bunch of birthday letters so she could receive one on each birthday until she was twelve years old, which she is turning soon.  However, even though the letters stop after her 12th birthday, she discovers that her father also left her eight keys that open up mysterious doors in her uncle's barn.  She begins to find the keys in different places and at times when she seems ready to receive another one.  The keys and doors reveal a lot about her past, her parents, and herself.  She begins to see her life, friendships, and school through a different lens.

I think Eight Keys will be our next read aloud that we start this week!  It is a great book for middle grade students and would be a great companion text to read before or after Jeremy Fink and the Meaning of Life by Wendy Mass.

Posted by Melanie Swider Wenz at 6:58 AM