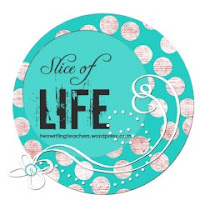 During the month of March, I have been participating in the Slice of Life Challenge, hosted by Stacey Shubitz and Ruth Ayres at twowritingteachers.wordpress.com. I've been trying to do more creative writing and this post is part of a series about presents that I am working on, inspired by The Twelve Kinds of Ice by Ellen Bryan Obed. My father had a serious accident eleven years ago and I have been trying to figure out a way to write about it ever since. I'm trying to through this serious of memoirs about the gifts he has given me and my family members throughout our lives.

The Figuring Out Santa Present

Every year at Christmas, we tried to stay up and catch a glimpse of Santa or at the very least, of his sleigh. I was in sixth grade when we finally outlasted the old elf.

My parents put us to bed around ten and stayed downstairs with Uncle Barry and Aunt Jill.

At the time, Charlie was in second grade and the youngest of the three, the one who still definitely believed. My fourth-grade brother, John, and I were pretty sure that Santa was someone who shared our house and we were determined to catch our parents in the act.

“We’ll go to bed soon, Charlie,” my mom reassured him.

Charlie stayed awake longer than he usually did. As it was, he always needed an extra glass of water and an extra trip to the bathroom. His blankets were frequently crooked and his pillow was predictably the wrong temperature. On Christmas Eve, he was especially thirsty with a really active bladder. By the time I heard my mother become impatient with him—that’s enough, Charlie. Go to sleep—I was struggling to stay awake, as well.

In the dark, I tickled the roof of my mouth with my tongue and I pressed my fingernails into the palm of my hand. John’s whisper helped more than my self-inflicted discomfort.

“You awake?” His voice cut through the hallway.

“Yes,” I whispered back.

His silhouette appeared in my doorway, a rail thin shape in his pajama pants that stopped at his shins. I hoped that new pajamas would be in one of his boxes.

“They’re still talking.” His blonde hair stuck up and his fingers straightened as he spoke.

We really didn’t know the answer to that question. Mom and Dad were always still up when we went to bed. Sometime between our bedtime and our wake-time, since they were almost always still in bed when we woke up.

Suddenly, we heard the click of the outside door.

“What was that?” John asked. We both listened but the house was quiet.

“What are they doing?” I asked. I got out of my bed and the two of us stood at the top of stairs, listening as hard as we could in the dark.

John had to use the bathroom and within seconds, he called me in. “Mel, look,” he said.

Across the expanse of our backyard, four figures were carrying something big toward the house. Dad and Uncle Barry were at the heavy end, but Mom and Aunt Jill were helping as well.

“What do you think it is?” John asked.

We really couldn’t tell what they were carrying, but we knew that they were bringing the big present of Christmas into the house.

I got back into bed, excited to have finally caught Santa, disappointed, as well, to know that our carrots would not fuel any flying reindeer, and happy to be able to go to sleep.

The next morning, John and I jumped up and down and gushed about Santa when we saw the pinball machine in our basement. It really was an amazing toy, the kind of pinball machine you would find in a real arcade with a slot for money (closed off, of course), a propensity for giving Dad extra balls and points, and a small sticker that said Built by Newman Brothers. We played for hours and hours, racking up points and keeping track of high scores. My dad twinkled and sparkled as much as the machine as he enjoyed our shrieks and squeals as we mastered the buttons and levers. That Christmas Day, stockings, John’s new pajamas, and dinner were hardly noticed and celebrated because of our bell-ringing, point-tallying, lights-flashing new toy that Santa didn’t bring.

Thirty years later, we still have our pinball machine and it entertains my daughters, their cousins, and friends in the basement. If there ever was a gift for figuring out the source of Santa, the Newman Brothers definitely provided it to our family. And my father still lives to hear the bells and knocks  and laughter when people are playing.

Posted by Melanie Meehan at 7:10 AM