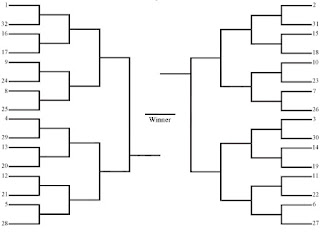 I have never quite understood the whole concept of March Madness since I do not follow basketball, but this year I became intrigued by it because I have seen educators applying the concept in their classrooms.  For example, I have read blog posts and tweets about the March Madness for Poetry, Word Study, and also books.  Recently, I have been thinking about how our classroom could create a March Madness for Books, but since I didn't fully understand the bracket details, I kept putting the idea on hold...until today.

Today, a group of boys ate lunch in the classroom and I brought up the topic of March Madness with basketball and if any of them were familiar with it.  One of my avid readers immediately piped up with excitement and said that he participates in March Madness each year.  I threw out the idea of doing it with books instead of basketball teams.  He immediately stood up, asked if he could use a piece of chart paper, and began to sketch out the 32 brackets and began explaining how it would work with books.  The other boys gained interest and began chiming in to create a list of 32 books they knew were class favorites.

They shared the concept and plan with the rest of the class after lunch and already began debating and predicting which books they hope would win.  The student who brought the idea to action today, asked if he could type up the brackets tonight with all the book titles so we can get started tomorrow.  I love seeing the excitement for this grow organically before my eyes today - it was great!

Stay tuned for more about our March Madness Book Edition (by the way, that was the "official" name the class came up with today!).