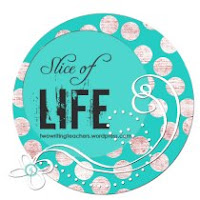 For the month of March, I am joining up with many bloggers and committing to daily writing, participating in the daily Slice of Life Challenge. I have written a longer story today, one that I was inspired to write from a story that I hear on NPR. The ending doesn't make me happy, but I'm thinking about it and I will re-visit it, I'm sure. I'm also sure that I won't be writing such long entries every day, but it's Saturday morning and I have both a story and time. Thank you so much to Jen and Stacy at twowritingteachers.wordpress.com for hosting the event. You can link up to their website and see what other bloggers have written for the day, as well.


As we approached the registers at the grocery store, my mother scanned the lines to try to figure out which one would be the shortest. Even though I know that she enjoys skimming through the current People magazine, I also knew that she was rushing because she had to pick up my sister and make it to a meeting.

“Let’s get in this line,” she said and guided the cart into register 4. I recognized the woman who was ringing up the groceries.  She was usually friendly and wore a nametag that said Nancy on her shirt.
I don’t think that Mom had paid attention to the woman who was ahead of us in time. She was old and she definitely was not moving fast. Mom realized this too late because another person came right behind us in the line. Our cart was stuck and we were staying in Line 4.
Mom looked at her watch and her list.
“I forgot the Special K,” Mom said. “Clare, can you start unloading and I’ll be right back.”
There was not much room on the counter for any of our groceries because the old lady was still taking her items out of her cart.
A box of corn flakes. On to the counter.
A small container of cream on to the counter.
A container (small size) of blueberries.
A muffin.
A frozen bag of peas.
Cat food. There still wasn’t room on the counter and she still had a few items in her cart. You can actually tell a lot about a person from what they buy at the grocery store.
“How is your cat, Willa?” Nancy asked.
Willa smiled and stopped unpacking. “She's old, too,” she answered. “She still jumps up on the counter when I’m not watching, though.”
Nancy stopped ringing and laughed. “Mine does the same thing,” she said. “I end up with paw prints on my counters that I’m constantly wiping.”
“These are the best sponges for wiping the counters,” Willa said. She reached in and pulled out her package of sponges. They were the same ones that my mother usually buys.
My mother came back, squeezing past the cart behind us and she placed the box of cereal on top of my pile. It slid down on to Willa's side of the groceries.
"Here you go," Nancy said, placing the cereal back on our side. She went on ringing.
Mom looked again at her watch. She must have been wondering why I had not put our groceries up but she was figuring it out.
"Can I help you with your groceries?" Mom asked.
Willa looked at Mom and smiled. "Aren't you nice," she said.
I smiled, pretending to study the rows of gum. Yes, Mom was being nice, but she really wanted to just speed things up. She wasn't too effective because Willa and Nancy took the opportunity to really start talking now.
"My Lily loves my cat," Willa said. She pulled out a picture of a toddler and held it out to Nancy.
"She's adorable." Nancy took the picture and held it up closely. "How old is she now?"
She continued to look at the picture and then the next one that Willa handed to her, asking questions and making statements. Nancy did not seem to notice the pile that was growing at the edge of the grocery divider. "Where does she live?"
Mom had unloaded the rest of Willa's grocery and Nancy looked up at the pile.
"Oh, dear, Willa," she said. "I need to ring and get on to the next customers."
Willa smiled. "You do," she agreed. "It was so nice talking to you, though."
Nancy helped Willa put the bags in her cart and then called for one of the high school boys who was working in other aisle to come and help Willa to her car.
"I'll tell you what," Nancy said. "You look out for me. I'll be over later and you can finish the story about Lily."
Willa looked ten years younger. She looked like the type of lady who was going to go home and bake scones and set the table with an elaborate tea setting.
Once Willa left, my mom helped bag as Nancy rang. We were going to be late to pick up my brother and I hoped that her meeting wasn't too important.
"Is Willa a neighbor?" she asked Nancy, packing up the eggs, the item that she always saved for last.
"No." Nancy shook her head and smiled without showing her teeth. "I just met her now. Her husband died last week and she is lonely. Such a nice person, but lonely."
My mom paused, almost seemed to freeze for an instant and I wasn't sure what she was going to say. Then, she surprised me.
"You are a lovely person, Nancy," she said.
She signed the slip and we left.
"Are we late, Mom?" I asked.
"A little," she said, "but no worries. Let's take your brother for ice cream before going home and unpacking."

Posted by Melanie Meehan at 7:34 AM